Was just reminded that eight years ago was the Heroes and Outlaws exhibition organized by City Arts Center (that became Oklahoma Contemporary) to celebrate Oklahoma’s Centennial. 100 Oklahoma artists were invited to depict a famous or well-known Oklahoman in whatever way they saw fit. Chuck Norris was born March 10, 1940 and was great inspiration for my piece: 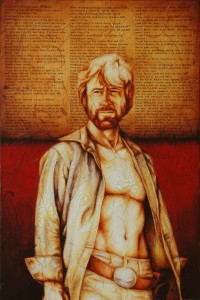 The quickest way to a man’s heart is with Chuck Norris’ fist.
45″ x 30″ Mixed Media on Canvas

One thought on “From the wayback machine: The quickest way to a man’s heart is with Chuck Norris’ fist.”